From The Lighthouse | Expressions that only Mexicans say 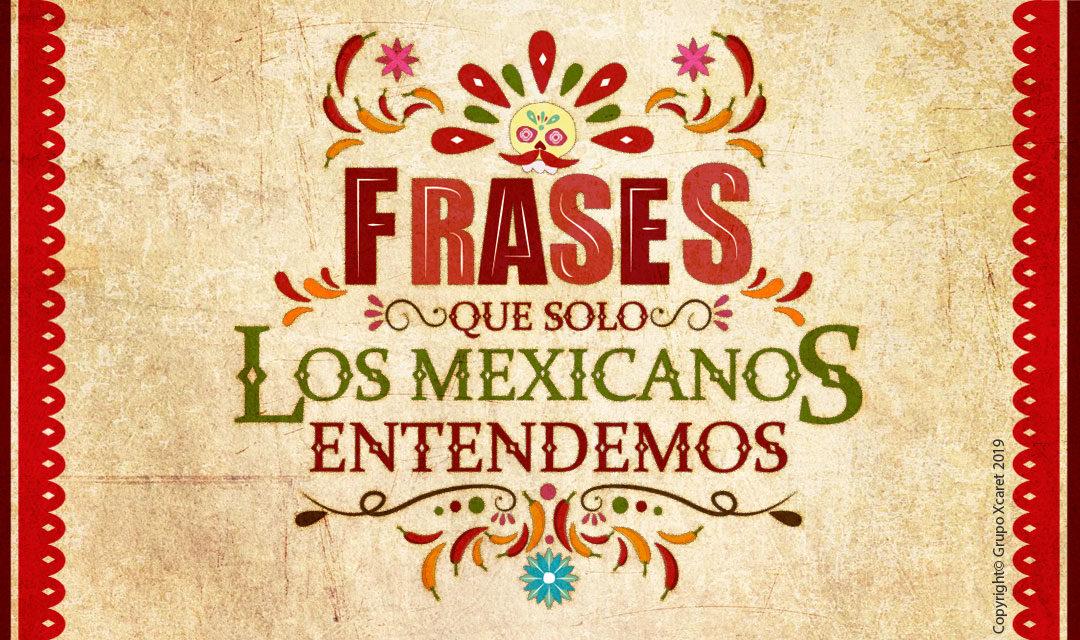 From The Lighthouse | Expressions that only Mexicans say

Mexico is such a diverse, peculiar and folkloric country, where Mexican phrases are very usual and common. So much so that we can use one for each occasion.

If out there you hear people saying that you're "fucking the changarro!", you can understand that you're wasting someone else's time or when you annoy someone and they've had enough of it.

"They bagged Chuchita!" Very used sarcastically and incredulously to what is being said, they credit a domestic worker whom they affectionately called "Chuchita". This woman was assigned to go "errand." However, after a while, Chuchita came back with less merchandise and less change than in the past. When her boss asked her what had happened, Chuchita said that she had been bagged. After the event was repeated countless times, the boss said "Now what happened? Don't tell me that Chuchita got bagged."

Have you ever gone to the Tamaulipas stadium and heard someone say "there goes the kidney water!" expression that was used as a warning also since the time of the Colony. During that cycle, there was no drainage and there were no toilets. Therefore, people used potty chairs. When these were filled, people simply shouted ¡aguas! And throw them out the window. Unlike the hygienic practices of the indigenous people, they were so clean, they built latrines and drainage channels, apart from that they used to bathe 3 times a day and brush their teeth.

The phrase "Know the ball!" emerged during the period of the Mexican Revolution. At that time, both men and women, children and the elderly, had in common to walk in the ball, many times they formed large groups that caused damage. Once the authorities asked people who had committed such acts, no one singled out any particular culprits. They just said “it was the ball”, referring to the group in general. Over time, this phrase was established in the collective. Currently we use it when they ask us about the author of some fact or destruction that we do not want to talk about and we only say "know the ball".

Anyone have any idea how to transfer files to the SD card on my phone which I've formatted and am using as internal… https://t.co/aEOZrm3DeR

"Not even going to Chalma to dance!" This is perhaps one of the most popular Mexican phrases and is used when a problem has no solution. This saying alludes to a town called Chalma, located in the State of Mexico, where the Sanctuary of the Lord of Chalma is usually visited to ask for a miracle. It is customary for people to dance outside the church to the rhythm of a banda or mariachi asking for a favor to be helped and that is where the famous saying comes from.

If you are Mexican, surely as a child you heard the phrase “donkey meat is not transparent”. This saying is widely mentioned among the little ones and means that someone is preventing the vision of others. For example, when an infant gets up and does not allow one or more children to see the notes on the board. However, you should know that there is a way to answer this phrase and it is the following: "and the pig's eyes do not see", all in a joking tone.

During the Mexican Revolution, the story tells that, before the prisoners were shot, they were allowed to smoke one last cigarette. At that time, one of the most popular and cheapest brands was “Faros”. Because of this, people began to say "he already sucked headlights" to indicate that someone had died.

"Fierro, relative!" This expression has become very popular in recent years and comes from the north of the country. The word "iron" refers to a firearm. However, the meaning given to it in the expression “iron, relative!” It is synonymous with "arre". This could be translated as "Cheer up!" "Go!" While "relative" refers to a very close person.