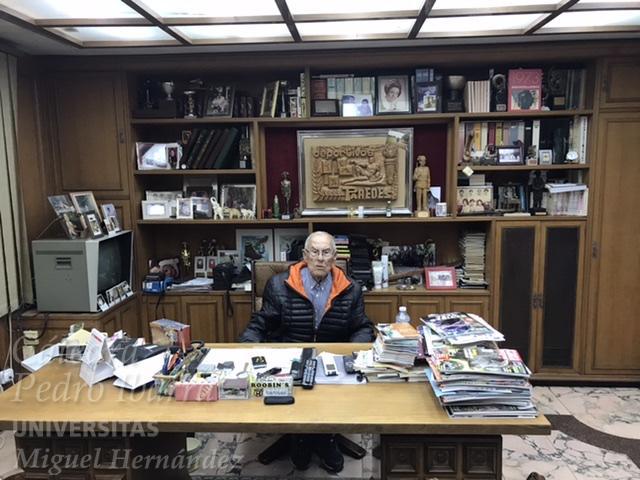 José Paredes, one of Elche's great footwear entrepreneurs, dies in an accident

Agents of the Local Police, members of the Fire Department of Murcia, as well as divers from the Special Group of Underwater Activities (GEAS) of the Civil Guard were mobilized to the place. The GEAS moved because the firefighters did not have the means to locate and extract the deceased, a task that lasted hours. The mortal remains are expected to arrive this afternoon at the Funeral Home of l'Aljub. The death caused a huge commotion among the city's business community because more than half a century ago he was one of the talents that turned Elche into a footwear emporium. Hand in hand with his sneakers, Paredes, and an aggressive campaign starring a young American singer, Leift Garrett, who recorded several commercials, he launched his sneakers to stardom.

The businessman, in his factory, in an image of his website .RDC

In 1954, José Paredes Castaño founded Calzados Paredes in the town of Elche as a footwear factory for men.

He was born on Cristóbal Sanz street, the son of Antonio Paredes Maciá and Clara Castaño. The marriage had three children, Antonio, Vicenta and José. José went to school until he was eight years old and he even had time to sneak out of class for a week. He especially remembers his grandmother, with a Salesian brother, "very pious and a very good person", who went to mass every day. His father was a communist militant. He worked at the Casaqueta factory, near Portes Encarnades, with a sewing machine. During the war, the Communist Party brought to Elche a machine for bullet casings that did not work and it was his father who fixed it and for this reason he remained in charge of the war factory. This allowed the family not to go hungry due to the special rationing for the workers of the war factories. When the war ended "he was immediately caught by the right-wingers." The grandmother then asked a priest for help and they released him, among other things because "he was a trio of pa" and she had had a priest hidden in her house.

José went through the Graduadas and a school near Solares Street. He did not like to study and at the age of eight he was already putting eyelets in the same factory as his father, the one in Casaqueta, with more than a hundred children, eyeletters, up to twelve years old, on a piecework basis and for 14 pesetas a week. He was like that until he was 12 or 13 years old. In those years he was already clear that he wanted to be an entrepreneur. He continued working and at night he went to the Orpa Academy, in front of what is now the Jesuit school. There he met a future businessman like Pérez Ibarra, one of his closest friends. He continued to always work piecework and began to earn money. Before the military he already received salaries of 80,000 pesetas. A young man, he remembers, without vices. He just liked to go to the mountains and hunt. In 1952, at the age of 20, he went to Rabasa for a year to complete his military service. On the way back, his mother gave him the patio of his house and there he began to make men's shoes. He and 14-year-old boys. He became an entrepreneur in 1953. With machines that allowed him to manufacture 1,500 pairs a day first and up to 3,000 pairs a day. Over time he would have almost 800 workers, as he says, with their own house, a chalet in Santa Pola and a country house. He married Genoveva Coves Hernández and the marriage had six children. He produced 14,000 pairs of sports shoes a day with 12 factories, each one producing 1,500 pairs a day, up to 25,000 or 30,000 pairs a day. He hired a modeller, Rafael Roselló, a Mallorcan, and looked for salesmen for the sale. His relationship with the banks changed a lot. At first, he went to the Banco Español de Crédito and they offered him, with the endorsement of his parents and relatives, 60,000 pesetas and later another 60,000 pesetas. He bought a plot of land for 128,000 pesetas and dedicated himself to the manufacture of men's shoes with flat soles, at 79 pesetas a pair and a 5% discount with bills eight days ahead. That way he earned a little less but manufactured four times as much and stopped having problems with the banks, "the banks came looking for me." He worked a lot of hours a day and spent one playing tennis with his friend Fermín Pérez Ibarra.

He bought some Adidas sneakers and in the same store he disarmed them. He served as a model for making men's and women's shoes. The advertising campaign with the singer Leif Garrett cost him 14 million pesetas. The Paredes sports cars went mainly to the national market. They did export the shoes: to all of South America, the United States, Italy, France. With the sport ones it happened that Nike arrived "and sank us". It was Brazil, where he bought the skin at half the price compared to other markets, who kept a large part of the clientele. Today, from his hunting estate near Murcia, at almost 90 years old, he continues to go to the factory, dedicated to safety boots, on Mondays "to take a look".

The creation of the Paredes brand, first as sports shoes to later reinvent itself in mountain and safety shoes, was the result of an entrepreneur like José Paredes Castaño, who liked to practice sports and could not find suitable footwear to practice it, at least in Spain. Thus, in 1954 he founded the firm Paredes manufacturing the type of men's footwear that he always found outside the peninsula. In 1973 he launched a collection of sports shoes that became the first brand from Elche to design this type of product in Spain. His shoes not only caught the interest of athletes, but also quickly became a common footwear for free time and, above all, a new hallmark for young people. The success was such that it gave rise to an explosion of national brands, many of them from Elche and still active. Paredes was the national sales leader in sports footwear until the mid-1980s, at a time when the big foreign brands had not yet entered the Spanish market with force. The spots on television and in all kinds of publications, with the promotional reinforcement of the then dazzling young star of the song Leif Garrett, placed the brand from Elche at levels of popularity unthinkable until then by any Spanish footwear firm. Currently its samples are made up of about 200 models of sports shoes, 15 for hunting and 80 for safety. Manufacturing is carried out mainly in Asia, although in recent years a good part of the production has been relocated to Elche and surroundings, especially fashion and more personalized footwear, with smaller runs. To say 'Walls' in the 1970s and early 1980s was to say 'sports'. The brand from Elche became so popular and sold that it not only defined its articles, but also became a generic for this new type of footwear, which burst onto the scene in late-Francoism and Transition Spain.

But the Paredes family not only has footwear as a business model, through the Paredes Holding Group they are dedicated to construction and the automotive industry. With regard to the automobile business model, they have dealerships for the Elche, Alicante and Orihuela areas with the Fiat group, which also includes Jeep, Alfa Romeo, Volvo and SsangYoung as well as Fiat industrial. In the footwear sector, the Paredes family, in addition to having its own brand, also distributes the Brazilian brand Boaonda in Europe, specializing in a type of footwear made with plastic materials and comfort insoles.

with what to glue the sole of a shoe