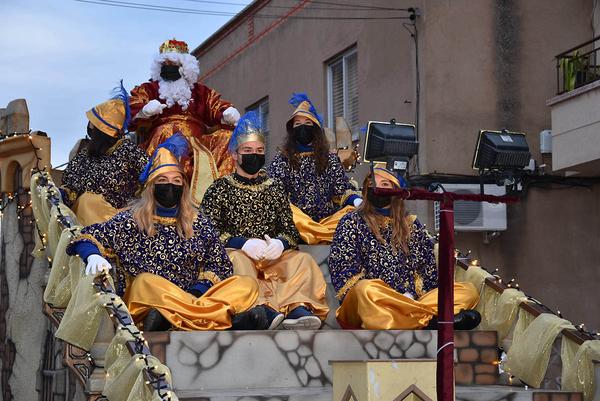 The Wise men deliver gifts in an afternoon full of illusion

There was excitement, nerves and, above all, illusion. The most magical night of the year began on the afternoon of January 5 at the leisure center of Mallén where seats and entrances were provided with all the security measures. Melchor, Gaspar and Baltasar visited the town again to discuss with children and adults.

Luis Pardos productions and the world of dolls, a company made up of six professionals from different disciplines of theatre, dance and circus, created an almost tailor-made show. With them, older and small sang and enjoyed circus numbers of balances, juggling, diabolical curls, games, songs, magic and a lot of fun.

The Almozandia company's show encouraged school holidays for the youngest in the town.  Special service

The show also had the presence of clowns, who wanted to pay a special tribute to characters, from Torrebruno to the well-known clowns De la tele, with a review of the unforgettable songs that marked several generations. It was a fun and tender show that all the attendees, children and elders, enjoyed.

Action by the Santa Cecilia Group. _

In addition, the Christmas cultural agenda also included other incentives for Malleneros during all holidays. As it is already traditional, the School of Jota in Mallén did not want to miss the Christmas date. Again, they excited the public with a vibrant festival that only they know how to do.

His Majesties' visit had a great show. _

Also the animation company and children's theatre Almozandia offered a beautiful montage under the title "one night between shoes" that, through a careful aesthetic, told the adventures of three shoemakers-Crispín, Tacón and Cordón-involved in travelling comedians. In addition, the Musical Group Santa Cecilia de Mallén prepared a great audition at the culture house in which they gave a good account of their advances in musical practice.

For its part, the culture house hosted a large musical session by the Trio Rally Deluxe, a group that counts as a vocalist with the Mallenera Eva Roncal. It was an afternoon of good music, in which we could only have been able to dance, but everything will come.

With magic in the shoes